A RABBIT OUT OF A HAT

The last day of the Boston Symphony European tour, in Paris, started out like the other days. The bus left the hotel on time, at 9:45. We arrived at Charles de Gaulle Airport on time at 10:30. We whisked through security, went to the lounge waiting area, and then to Gate 21, all according to plan.

After briefly waiting at the gate, we were told there would be a 45-minute delay. No big deal. Back to the lounge. I could use a cup of coffee anyway.

After an hour we were informed our plane, a Luxair private charter, had experience mechanical difficulties and there would be another hour wait. At this point our antennae went up. It was already the time we were supposed to have arrived in Amsterdam. As it was, we only had a few hours between arriving at our hotel and our scheduled pre-concert rehearsal. Our waiting lounge, unlike those at other airports, had no decent places to eat. About the best one could muster was a chicken with mayonnaise sandwich. So I had a chicken with a mayonnaise sandwich.

The Players Committee and management, staying ahead of the curve, started discussing Plans B-Z, depending on how late we’d be. Still no cause for alarm, though. Until an hour later we were informed the flight had been cancelled.

Cancelled! How the hell were we going to get to Amsterdam? It was too late to get back on a bus, and at this point taking a train was out of the question. (Train would have been faster than flying to begin with, but security concerns drove the decision to fly.) We continued to wait.

Calls were made, now with a great deal of urgency. Because I was not privy to any of it, I can only tell you what I heard secondhand. The good news was, Luxair could get a plane to de Gaulle sometime between 4:00 and 5:00. The bad news was, it was not big enough to accommodate all the musicians. However, they could fly some musicians to Amsterdam (a one-hour flight), turn right around and pick up the rest. We were each handed 11-Euro vouchers to get something to eat. Unfortunately, most of us had already eaten, so a long line formed at the fancy shmancy macaron concession for last-minute gifts.

Decision time. Our scheduled program was the Bernstein Serenade on the first half and the Shostakovich 4th Symphony on the second. The Bernstein instrumentation is for reduced string numbers and percussion, but no winds or brass. The Shostakovich calls for an army of musicians. So the decision was made: Take the Bernstein musicians, with solo violinist Baiba Skride, on the first flight, with enough additional winds to play the Beethoven 7th Symphony. Even though the orchestra hadn’t played the Beethoven for some time (and if I’m correct had only done it once before with Andris Nelsons conducting a few years ago) it remained one of the BSO’s strongest fallbacks. If the other musicians got there in time, we’d do the Shostakovich. If not, we would play the Beethoven.

Good plan. The plane (a prop plane no less) showed up. We were ready to go. The only glitch was that the airport officials decided to get officious. French bureaucracy rearing its famed opaque head. One musician at a time, they went through all the paperwork that had already been gone through for the original flight.

Finally, we boarded, but because of the paperwork delay, we missed our spot on the runway. By the time we took off it was 6:40. Forget about going to the hotel. Forget about the rehearsal Forget about Shostakovich. Maybe even forget about the concert. Once in the air, we were offered a sandwich–cheese or chicken. I knew from experience it would have to be cheese.

We landed at Schiphol Airport in Amsterdam at about 7:30 and were able to immediately get on a bus waiting for us by the efficient and pragmatic Dutch people. The starting time of the concert had been pushed back from 8:15 to 9:00 PM. Because we were starting so late, there would be no intermission between the Bernstein and the Beethoven. Would the Concertgebouw audience, having to wait 45 minutes, be as irritated as we were? That remained to be seen.

We got to the hall at about 8:15, and were provided a quick but surprisingly good meal by the efficient and pragmatic Dutch people. When we got onstage and were ready to play, the managing director of the Concertgebouw gave a little speech about the circumstances we had endured to get there, and the audience responded with very rousing applause. So far, so good.

Baiba Skride performed the Bernstein as if she didn’t have another care in the world. She’s a terrific violinist and, having traveled with the us musicians, which few guest artists do, showed herself to be a wonderful colleague as well. The performance went very, very well, in no small part to the magical acoustics of the Concertgebouw. Having just played in the other great halls on this trip, I’d have to say that the Concertgebouw is the créme de la créme! What a pleasure. 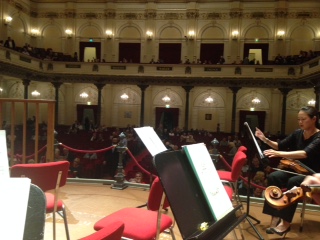 After the Bernstein came the challenge of the Beethoven, but first an answer to a question you might already have. How did we get the music? Here’s where having a great librarian come in. For a variety of reasons, every orchestra has its own set of parts to almost all of its repertoire. Playing on another orchestra’s parts could be very confusing, if not catastrophic when sight-reading at a concert! Wilson Ochoa, the BSO librarian, and his crew downloaded and printed out every part to the Beethoven for all seventy-plus musicians from his computer files. Not only that, by the time we walked onstage, they had professionally bound all the parts as well. Talk about teamwork! And at this point, may I also say kudos to the whole management team for pulling a rabbit out of a very deep hat!

Here was our (the musicians’) question: Would Andris Nelsons play it safe, lay back, and just let the orchestra find an acceptable groove? Beethoven 7th is a symphony we can play in our sleep, but that might make it sound…sleepy. On the other hand, how damaging would a BSO train wreck in the Concertgebouw be on the last night of a big tour?

It took about two seconds to get the not unexpected answer. Nelsons, like the musicians, was ready to show the crowd what the BSO could do under the most trying circumstances. It was a true collaboration. Whatever he showed, the orchestra responded. Standing ovation. And as a personal note—after having alternated the Mahler 3rd and Shostakovich 4th for the whole tour, it was revelatory to hear what a supremely gifted genius Beethoven was. For me, it was the perfect way to end the tour.

Walking off the stage at 10:30, we got the news. The rest of the orchestra had just gotten off the plane at the airport. I’d been one of the lucky ones. What a pleasure and an honor to perform Beethoven with the Boston Symphony conducted by Andris Nelsons in the Concertgebouw. It doesn’t get much better than that.

There was a post-concert party at the hall hosted by Nelsons. A lot of good food and drink and promises to return to Amsterdam under better circumstances in the near future. We finally arrived at our hotel at 12:30 AM. It had been a long day. With an 8:15 AM bus to the airport and home, I was ready for a rest. 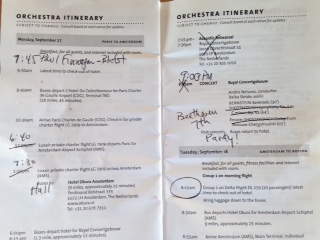 Best Laid Plans (Might look blurry, because it was.)

If you enjoyed this hair-raising episode, you’ll go crazy over SYMPHONIES & SCORPIONS.