I’M VERY PLEASED TO ANNOUNCE THE LAUNCH OF:

GETTING THROUGH: TALES OF CORONA AND COMMUNITY!

GETTING THROUGH is the fruit of a grassroots effort to grow community through story-telling during this unprecedented period of coronavirus physical isolation. By donating ALL of our profits from book sales to the Red Cross, reaching out to help those who are in desperate need during these harrowing times, we extend that sense of community.
The stories, essays, and poems contributed to this collection were mostly written within the first few weeks of confinement by some old friends and many from new friends whose faces I’ve never seen; from aspiring writers to established authors; from every corner of the US and from around the globe; from scientists, musicians, birders, high school students…you name it. Some pieces are deadly serious, others a touch bizarre, and some I hope will give you a chuckle in these difficult times.`
In GETTING THROUGH, you’ll find fiction, nonfiction, poetry, dystopia, essay, memoir, humor, science fiction, children’s stories. Stories of faith and hope. Stories of biting satire and of empathy. Love letters from parents to children. It’s all good. People are creative in many ways. The collaborative effort has given us, the authors, direction and hope and spirit as we face the harsh realities of the COVID-19 pandemic. By sharing the fruits of our labor with you, the reader, we hope you will join us in our community-building aspirations so that when it’s finally safe to go outside again–as it will be–we will enter an even better world hand in hand.
Here’s the honor roll of contributors to GETTING THROUGH: Robert Baldwin, Riccardo Betti, Johanna Fridrich, Dan Blum, Ann Chamberlin, David Cowley, Mi a Bella D’Augelli, Robert Debbaut, Victoria Dougherty, Gerald Elias (author and editor), Katherine Fast, Priscilla Halberg, John Harrison, Jesse Hercules, Rosalind Horton, Stephen Hughes, Tana Hunter, Julie R. Ingelfinger, Janet K. Linder, Cheryl Marceau, Julia Moser, Kim Nagy, Laura Osborne, Steven Sedley, Sam Shames, Cami Shaskin.

PLEASE CONSIDER A PURCHASE OF GETTING THROUGH, AVAILABLE IN PAPERBACK FOR ONLY $9.99. YOU’LL BE SUPPORTING THE RED CROSS, I GUARANTEE YOU’LL ENJOY THE STORIES, AND IT MIGHT EVEN HELP YOU GET THROUGH. THANK YOU!

Excerpted from my book, Symphonies & Scorpions, “War & Peace. And Music,” is based on my reflections of a Boston Symphony performance in Tokyo in 2017, and how music and musicians have the potential to help create a more peaceful world.

…an eclectic anthology of 28 short mysteries to chill the warmest heart.  (2019) Hailed as “a master story teller” by iBerkshires, award-winning author, Gerald Elias, has gathered all of his short mystery fiction in a single, impossible-to-put-down, volume. Some of the stories have been previously published in other anthologies. Others appear here for the very first time.

…an eclectic anthology of 28 short mysteries to chill the warmest heart.

PLAYING WITH FIRE (2016) A suspicious fire at Ye Olde Violin Shoppe on Christmas Eve leads Jacobus along a perilous trail of death. “(Elias) has the reader on the edge of the seat till the end.” –Stringendo Magazine

DEATH & TRANSFIGURATION (2012) A tyrannical maestro with blood on his hands covers up a dark past. “Brilliant and captivating on every level.” –Booklist (starred review)

DEATH & THE MAIDEN (2011) Members of a renowned string quartet mysteriously disappear, one by one. “Fast-paced and punchily written.” –Library Journal

DANSE MACABRE (2010) After a beloved, internationally renowned violinist is brutally murdered with an unknown weapon, Jacobus reluctantly investigates whether the virtuoso’s young rival was the killer. “This book should not be missed.” –Aunt Agatha’s Top Ten

SYMPHONIES & SCORPIONS. 2017 An insider’s (my) look at the world of an orchestral musician, seen from the backdrop of two historic Boston Symphony tours to China.“Fascinating storytelling combined with his perceptive backstories.” –iBerkshires

(ALL AUDIO BOOKS INCLUDE MUSIC INTEGRAL TO THE STORY AND PERFORMED BY THE AUTHOR.)

Here’s a sample of the music and story from Devil’s Trill I think you’ll enjoy: Audio Teaser 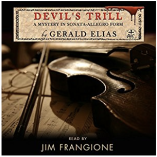 Volume 1:  Sleeping Beauty, Head in the Sand, Make Mine a Double

Volume 4:  Pea Soup, Oh Give Me a Home, Asparagus

Volume 5:  Christmas Concerto, Where the Buffalo Roam, Fool Me Once

Volume 6:  Where Seldom Is Heard a Discouraging Word, The Case of the Burqa-ed Busker, The Day After Memorial Day

Pea Soup (2014) The famous New England fog is a metaphor for the state of mind of an inbred backwoodsman.  –Sherlock Holmes Mystery Magazine #14

Where the Buffalo Roam (2015) Monk Hammond’s disappearance coincides with a shindig of politicos on Antelope Island in Utah.  –Ellery Queen Mystery Magazine

Brotherhood (2015) Does a distraught string bass player get away with killing the conductor? –Red Dawn, pub. Level Best

Please visit my Music to Die For page, where you can hear me perform the music mentioned in my first four novels and read my audio notes on these works.

To listen to an entertaining interview about the Daniel Jacobus series and hear me perform some of the “title music” live, here’s a link to the syndicated radio show, Highway 89.